But they marked “the beginning of the end” for a trend that used to prevalent in Western society—“relativism.”

Now, I can hear some of you objecting already.

These ideas, for some, seem to be alive and well, you might remark. And that may well be true. But I would encourage you to think beyond even what people are saying and notice what people are doing.

It’s easy to be careful with your words when debating philosophy.

What’s not so easy is to live consistently with the ideals one preaches.

The Fall of Relativism

I submit to you that, actually, relativism is dying a painful death.

The world doesn’t have much to say about what’s “true for me” or “true for you” anymore, though vestiges of that thinking can certainly still be found.

Instead, most people are trading such language for an allegedly higher ideal: Kindness.

Don’t get me wrong—kindness is a good thing. I actually recorded a podcast episode about this not too long ago. Kindness, insofar as it is properly defined, is a wonderful virtue.

But in today’s society, “kindness” is being ill-defined and then placed on a pedestal as the “new” objective morality.

Popular atheist writer and the founder of Skeptic Magazine, Dr. Michael Shermer, has a rhetorical way of putting this that might help elucidate the view.

In a debate with Greg Koukl, Shermer lays out the principle this way when responding to the charge that his moral basis is relative, rather than objective:

Well, I don’t think it’s quite so black and white. That is to say I think there are provisional moral truths that exist whether there’s a God or not. In other words, it’s wrong, morally, absolutely morally wrong to rape and murder. And that would be true whether there was a God or not. In other words, if…is God saying that it’s wrong because it’s really wrong, and He’s instructing us in his Holy Scripture that it’s wrong? Or is it only wrong because He said so? And if it turned out there wasn’t a God, would that make it okay? And my answer is no, it really is wrong, whether God says it’s wrong or not. That is to say I think it really exists, a real, moral standard like that. Why? Well, because first, you could ask the person who is being affected, we should always ask the moral recipient of the act, “How do you feel about being raped or murdered or stolen from or lied to?” And the moral actor will tell you, it doesn’t matter whether, if I could use a current example, I haven’t any idea if Tiger Woods and his wife are religious or not. But you can just ask his wife whether it was morally right or wrong, and she’ll tell you. It doesn’t matter whether there’s a God or not. It’s wrong. And so that’s the first principle. Just ask. Ask the moral recipient of whether it’s right or wrong.

Did you catch the thinking?

Furthermore, reading further into the debate will drive you deeper into an understanding of Shermer’s position (which I would argue is becoming quite popular amongst lay-audiences, even if they don’t know where it comes from): That is, that there is an intrinsic flavor to the nature of this moral framework.

And this is where the debate pretty much stays. What accounts for that? What can ground a moral framework that is based on the intrinsic worth of a human life?

Worldview (Once Again) As the Issue

And so again we land on the idea of worldview.

If a person’s worldview is that individual persons get to define “kindness” and use this as a sort of “objective morality,” then that person can define kindness in a way that actually denies objective reality.

Logically, it runs into contradictions as well, which is a dead giveaway of its failure to produce the goods.

Most people would agree that “telling the truth” to loved ones falls into the definition of kindness. But one may decide that, for them, it’s unkind to “judge” their personal choices, say, with respect to their gender.

So in this faux “objective” moral system, one cannot live consistently. If person A fails to question person B’s choices, but loves person B, she is denying her true kindness by allowing her to live a lie.

See how it all falls apart?

“But Steve, you literally JUST said relativism was going out of style. What gives?”

Of the many inherent dangers such a “new” objective morality contains, this one certainly mustn’t be overlooked.

The lesson is this: While the language of relativism has gone out of style, something far more divisive has become “cool”: the illusion of objective morality.

Now, if you are “unkind,” you are also bigoted and intolerant. See how that works?

Reacting with Zeal and Grace

While I don’t claim to have all the answers here, let me give you three suggestions that may help you navigate tough conversations around these issues, especially as families are gathering for the holidays during the close of what has been an extremely difficult year culturally and politically.

Perhaps most importantly is not to let yourself be taken advantage of by this thinking.

So many are fooled by this way of thinking because it has a sort of rhetorical power to it. But as they say in Texas—Big hat, no cattle.

Say what they will, this is a moral system absolutely grounded in a subject, not an object, which means that—color it how you will—it is a relativistic morality.

I think Dr. William Lane Craig has offered an interesting—and helpful—suggestion along these lines.

While formulating his now popular Moral Argument for the Existence of God, he noticed that university campus students overwhelmingly wanted to affirm an objective morality.

And surely, from what I’ve described in this blog post, you can see how humanity wants something objective.

The reason why it is ultimately subjective is because of how it is grounded. By offering the Christian worldview, we offer them a meaningful moral grounding for the objective morality they wish to hold.

Although that objective morality is based on something entirely different than their faux version, it may be helpful to affirm their willingness to think in terms of absolute morality and trade on their inability to achieve it in a naturalistic/humanistic system.

Finally—and this goes for any conversation—we should always strive to communicate with grace and love as a Christian ambassador.

We’re not out to win the war against our unbelieving family.

We’re out to win THEM.

And you could literally do one or the other just based on the way you communicate.

As the Apostle Paul so elegantly said in Colossians 4:6, “Let your speech be alway with grace, seasoned with salt, that ye may know how ye ought to answer every man.” 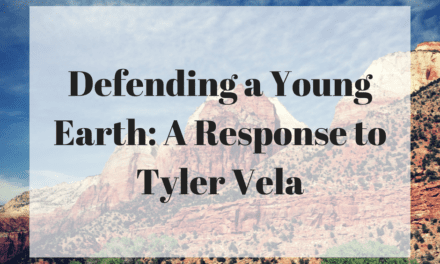 Defending a Young Earth: A Response to Tyler Vela (Part 1) 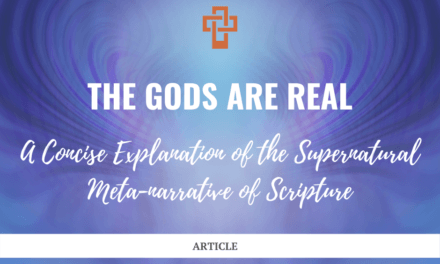 The Gods Are Real: A Concise Explanation of the Supernatural Meta-narrative of Scripture

What we love, we’ll defend