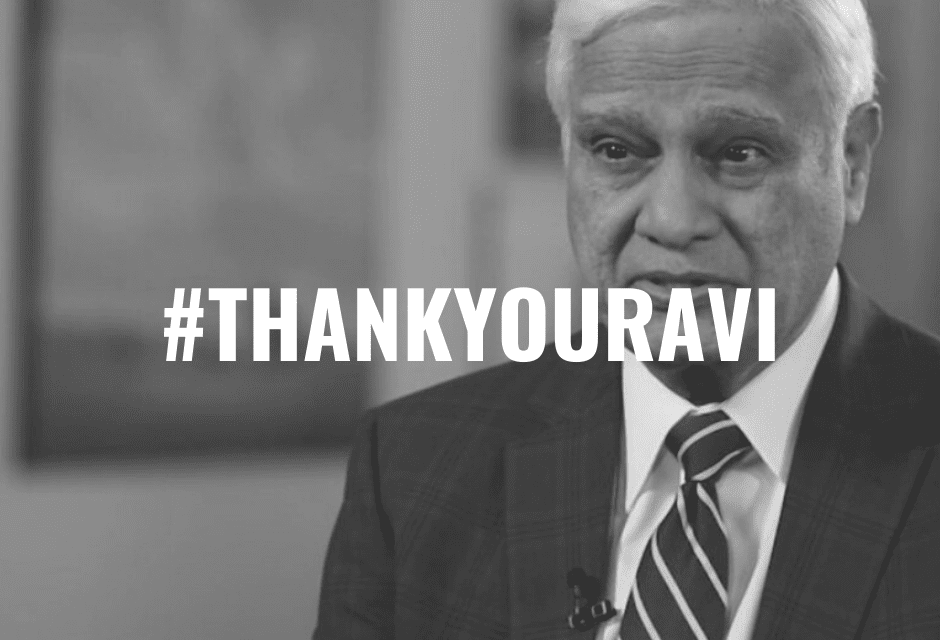 Note: It is with a heavy heart that I must acknowledge a tragic independent report concerning evidence of sexual abuse and predatory behavior on the part of Ravi Zacharias. This man was a huge inspiration to me, as is evident from reading my blog, and the news was more than heart shattering. Some ministries leaders have come to the conclusion that removing articles about and references to Ravi is the right move; I have come to a different conclusion, and here is why:

Recently, RZIM shared the news that Ravi Zacharias’ cancer situation had taken a turn for the worse. Ravi’s daughter, Sarah, shared the following:

Thank you so much for your faithful prayers for my dad and for my family in recent months as he has undergone back surgery and treatment for cancer. Truly, words fail to convey the depths of our gratitude for your many expressions of love.

We have just learned that while the tumor in my dad’s sacrum has been responding to the chemotherapy, the area where the cancer metastasized has actually worsened. His oncologist informed us that this cancer is very rare in its aggression and that no options for further treatment remain. Medically speaking, they have done all they are able.

Ravi, Margie, and Naomi are returning from Houston and will remain at home in Atlanta, where our family can be together for whatever time the Lord gives us.

The organization has asked that those who’ve been impacted by Ravi’s life and ministry share something with the hashtag #thankyouravi.

I am very appreciative of the work Ravi has done. The first apologetics book I ever picked up—the one that started my journey into this season of life—was Lee Strobel’s The Case for Faith. Lee interviewed Ravi as the expert to discuss the question of Jesus being the only way to God.

While Ravi Z. was unknown to me despite my being a Christian for over two decades at that point, it turns out he had been a force to reckon with for the Christian world. I think he was the first interviewee in Lee’s book I was so intrigued by that I had to Google him and find out more.

And the rest, as they say—is history.

It was not very long before I was subscribed to every podcast RZIM put out. Ravi is without a doubt one of the wisest, most well-spoken individuals I’ve ever listened to. I have spent hours with his content in written, video, and audio form, and to say I have learned a tremendous amount would be an egregious understatement.

For a humorous anecdote, the one gripe I have with Ravi’s books is they take twice as long to read because I have to use my computer’s dictionary at least once per page to get the definition of a new word I’ve never heard before, LOL.

I still remember Ravi’s words just a few short years ago at Nabeel Quereshi’s memorial service. I am sure Ravi did not anticipate his journey would be coming to an end so soon, but none of us are promised tomorrow. This recent news is just a sobering reminder that no matter how long you spend in service of the Lord, no matter how much good you do in the world, no matter how invincible you seem—when he calls for us to come home, home we go.

I am sure Ravi will miss those whom he deeply loves, but I can assure you he is ready and excited to meet his Savior. The Lord is good.

If I were forced to choose the single most important thing I learned from him, it would be this: Answer the questioner, not merely the question. It’s one thing to have a calculated philosophical answer to objections; it’s quite another to be winsome and compassionate. This is not only wise advice, but can be witnessed first hand in practice in the countless Q&A sessions RZIM has made available online.

Here’s a hymn Ravi loved and often quoted during lectures and Q&A sessions:

He giveth more grace when the burdens grow greater, He sendeth more strength when the labours increase; To added afflictions He addeth His mercy, To multiplied trials, His multiplied peace.

When we have exhausted our store of endurance, When our strength has failed ere the day is half done, When we reach the end of our hoarded resources Our Father’s full giving is only begun.

Fear not that thy need shall exceed His provision, Our God ever yearns His resources to share; Lean hard on the arm everlasting, availing; The Father both thee and thy load will upbear.

He giveth more grace, indeed. Thank you Ravi, for all that you have done. Your impact is immeasurable, and I’m confident the reward will be infinitely more so.

Why I Tend to Trust Experts Who Toe the Line

Why Are You Still Reading the News?