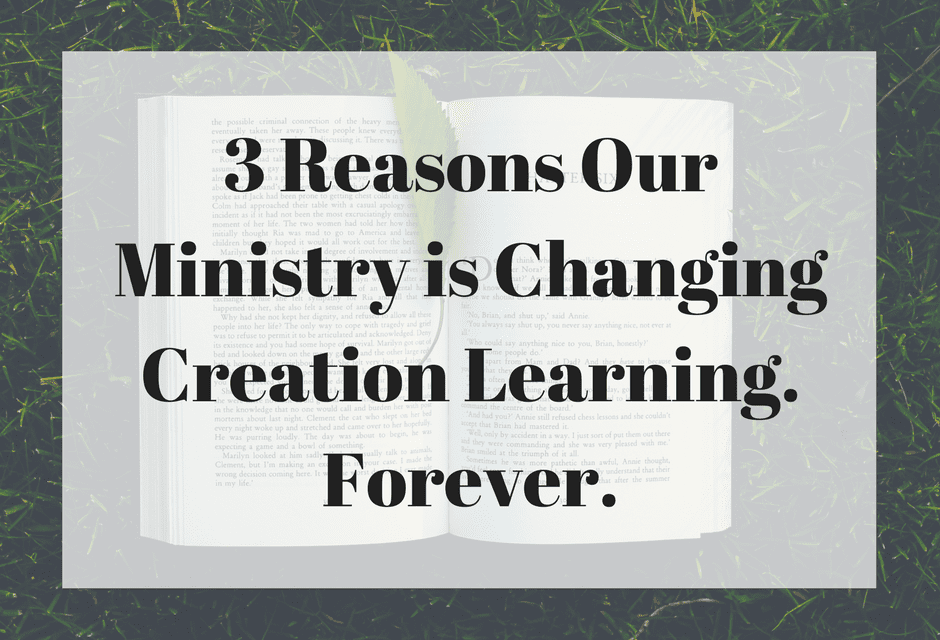 Since the beginning days of the modern creation science movement, creation learning has come a long way.

As a student of the greats such as Dr. Henry Morris, Dr. Gary Parker, and those who have followed in their footsteps, I have taken a keen interest in promoting the work and research creation scientists are doing and making it accessible at a popular level.

I am not a scientist. But I am a communicator. And God has prepared me and this ministry for such a time as this.

As you may already know, we are planning to launch The Creation Academy (TCA) in early 2019, Lord willing. We are committed to a very straightforward statement of purpose:

“The Creation Academy is an apologetics ministry designed to teach, train, and inspire others to become strong defenders of the Christian faith and Biblical Creation.”

We are committed to offering in-depth video training, audio training, PDF workbooks, eBooks, expert interviews, Q&A sessions with actual creation scientists, and much much more in the future.

(By the way–now is a good time to visit this link and get on the waiting list. You’ll receive access to the paid Facebook group NOW–for FREE! Help us build The Creation Academy!)

But for all of this good and exciting news, I thought I would take a moment to really center in on our why.

I’m going to share with you the three reasons why The Creation Academy exists, and why we think it will forever change the face of creation learning.

#1. We Teach Why Creation Works

This might seem obvious at face value, but if you really think about it, none of the major creation ministries actively promote new creationist research and discoveries.

Sure–they do in their research journals. But the vast majority of the popular level communications from these ministries have not been centered around why and how creation works, but rather why and how evolution doesn’t work.

There is a time and a place for this sort of teaching. But in my estimation (and the estimation of others), it completely misses the mark to teach only this side of things.

I take the unpopular stand with other creation ministries who claim that evolution is not so dumb as many make it out to sound.

I believe that we can trust our Bible in spite of current mainstream scientific teaching, but it should not be lost on you how important it is to build an understanding of the natural world from a scientific creationist perspective.

The Creation Academy aims to serve as the central hub for popular study as to the building of the creationist worldview.

We’ll do this in a variety of ways: We’ll have video lessons with comprehensive (and high quality) visual aids and elements.

We’ll create FREE quarterly eBooks with graphical helps that focus on one specific theme, rather than a magazine which often attempts to cover difficult topics in a limited amount of space.

We’ll interview creation researchers about their latest scientific papers and discoveries, and even have live Q&A time with them to answer ANY questions you have.

Of course, we’ll continue producing the Creation Academy Podcast and continue posting weekly blog posts here and on the TCA site as well.

Frankly, this is just the tip of the iceberg. We have many future plans that are exciting and a little intimidating, but really cool.

Being a biblical creationist excites me. I think our time is now. But for that to be true, we must teach why creation works.

#2. We Promote Biblical Creation with Humility

Secondly, and to a point mentioned above, we must learn how to deal with opposition and answer critics in a respectful, and intellectually honest manner.

Look–I know how tempting it is to tell a theistic evolutionist that he is dead wrong and diminishes the gospel.

I know how tempting it is to chide an evolutionist for believing something with “zero evidence” and prescribing to the “false religion” of “satanic evolutionism.”

But can I tell you–unless we season our apologetic with salt and respond with understanding, honesty, and grace, we have zero–zero–hope of making an impact.

Do not misunderstand me–I believe that one day, whether here or in glory, evolution will be exposed as the single greatest and longest surviving lie in history and that humanity has ever known.

But let’s be honest. In the day we’re living, many folks right here in America don’t even know the name Jesus.

We live in a world where it’s possible a child never learns about God until he is much, much older, and even then is taught that God is imaginary and that to believe such a thing would be intellectual suicide.

And one of the saddest realities of all is that the theory of evolution may well be the only theory of origins a young person growing up in today’s world is taught.

In a world where that is the case, we must boldly proclaim the truth of creation and the truth of the gospel (which, really, are one in the same), but we must also do this with the same meekness and fear required of us by the verse which commands us to defend our faith in the first place–1 Peter 3:15.

This also means that we ought to develop both a robust theology and a robust philosophy of science with which to approach the natural world from a creationist perspective.

To this effect, TCA will not only teach about the sciences, but also will engage in teaching biblical studies, apologetic methodologies, personal evangelism, and practical methods of response which will teach students to engage honestly, thoughtfully, and with the same grace and character our Lord Jesus did when responding to challengers.

#3. We Encourage and Inspire the Next Generation

Finally, our core mission will not be accomplished until we’ve successfully ignited a zeal and passion for creation studies into the next generation of young Christians.

The truth is that it’s hard to maintain creationist belief when academia is so violently opposed to your views.

And yet, even today, we see scores of young men and women creationists who push past these limitations and graduate with M.S. degrees and even Ph.D.’s in areas of study with significant impact on the origins debate.

We simply aim to fan that flame because, unfortunately, countless others never pursue the sciences for fear that the sciences will destroy their faith altogether.

Some find ignorance to be blissful, but I find it meaningless and harmful to the cause of the gospel.

There are good answers. There are scientific truths to be discovered which in no way harm the Genesis account, and instead, serve to confirm it! But unless a new generation continues in the stead of the old, the momentum will be lost and creationist research will stymie once again.

TCA will aim to fill such a need and serve the Kingdom by utilizing reward programs, special initiatives and incentives, and other exciting activities which will inspire passion and vigor in the next generation of potential creation scientists.

Our goal is that in the future we can gear and extend such learning opportunities toward our High School, Jr. High, and even Elementary School-aged students in a fresh and exciting way.

While much of creation learning in the past has been ill-produced, starved for quality, and even cheesy at times, we endeavor to make the creation sciences exciting and attractive to those considering pursuing careers in STEM (Science, Technology, Engineering, and Mathematics) studies.

The truth is that since God made our world, much of our practical scientific application has actually been misapplied by assuming evolutionary presumptions. Once more scientists engage in their research to the end and purpose of knowing God in a more intimate way, we may begin a whole new age of scientific discovery and revolution.

This is how science got started in the first place! Truly, we’ve left our “first love” (see Revelation 2:4-5).

I’m putting all of my heart and soul behind TCA because I truly believe that together, we can make a lasting and eternal impact for the glory of God and the furtherance of His kingdom.

Will you join me? 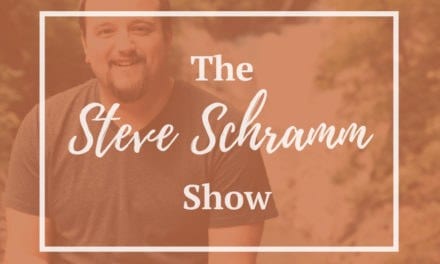 SPECIAL EDITION: Evidence for the Resurrection 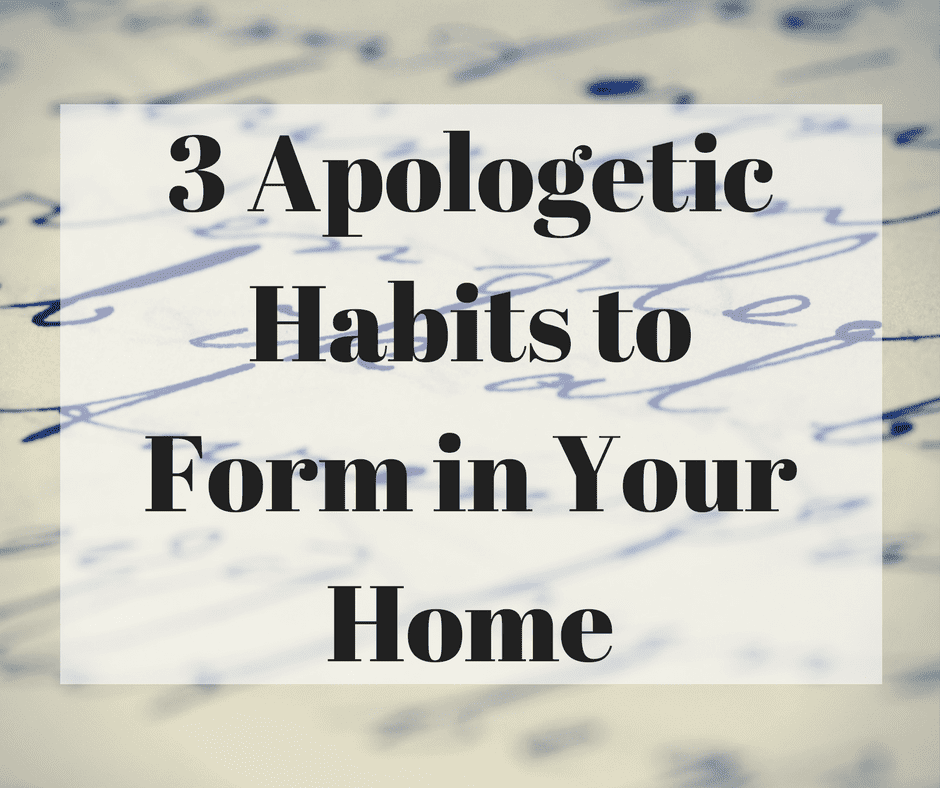 3 Apologetic Habits to Form in Your Home 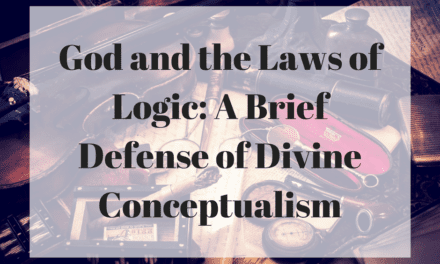 God and the Laws of Logic: A Brief Defense of Divine Conceptualism 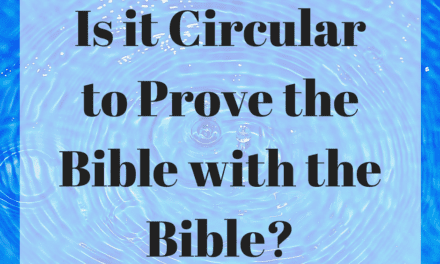 Is it Circular to Prove the Bible with the Bible?